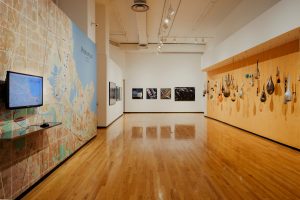 Chicago is known for its blues bars, its futures markets, its gun crimes and the sprawling rail yards that make it the freight hub of North America. What’s missing from that list is a vast nexus of underground pipes that exerts a subterranean influence on the entire metropolitan region. Without the knowledge of most inhabitants, the “Windy City” has become the Midwestern capital of the oil industry.

Let’s have a look from the four directions. Up north, Enbridge’s main lines from Edmonton take aim at Chicago from the 450-acre Superior Terminal in Duluth, Minnesota. One of these pipes, the infamous Line 61, is gradually being tripled in capacity to reach a staggering 1.2 million barrels of diluted bitumen a day, more than enough to replace the defeated Keystone XL project. A northward-flowing line, also operated by Enbridge, pumps diluent from the massive BP refinery on the southeast edge of Chicago to buyers in the faraway Tar Sands region. From the south, three major pipelines connect Texas oil wells to Chicago area refineries, by way of the giant storage hubs of Patoka, Illinois, and Cushing, Oklahoma. Two more Enbridge lines flow in the opposite direction, bringing the deluge of Tar Sands oil within reach of thirsty Gulf Coast markets. Out west, the pipeline story continues along the rails, in the form of long black tanker trains filled to bursting with explosive Bakken crude. Some forty of these rolling pipelines – also known as “bomb trains” – cross the densely populated Chicago metro area every week, so far without any catastrophic incident (the closest explosion yet was in Galena, some 150 miles distant). To the east, the oil flows away from the city along the rails and by way of Enbridge’s freshly enlarged Line 78, formerly known as “6B” when it dumped twenty thousand barrels of diluted bitumen (“dilbit”) into the Kalamazoo River in 2010. Still more crude is pumped east by smaller and more intricate pipeline networks maintained by corporations like Buckeye Partners and Wolverine. In a broad arc around the Chicago metropolitan region, and especially along its southern fringe, the white plastic vents and orange warning signs of the pipeline industry are so ubiquitous that most inhabitants no longer even bother to see them. “What we don’t want to know,” they seem to say, “can’t possibly hurt us.”

The ostrich strategy reached its limits in 2013, when three huge piles of a refinery by-product called petroleum coke, or petcoke, began accumulating along the Calumet river in Southeast Chicago. Petcoke is a hot-burning fuel that looks like a fine grade of coal. It is produced in giant vertical drums called cokers, where the carbon-rich residue of fractionated heavy crude is evaporated one last time to release a few more barrels of high-value fuel. Diluted bitumen from the Alberta oil sands leaves behind excessive quantities of petcoke: some six thousand tons of the stuff roll out of the BP refinery every day, while yet more is produced at the Citgo refinery in Lemont and the Exxon-Mobil refinery in nearby Joliet, which have also switched to Tar Sands oil. The sheer visual eyesore of the petcoke piles, along with the fine dust blowing directly onto the adjacent neighborhoods, finally revealed the crude truth of Chicagoland: its refineries process approximately one quarter of all the heavy Canadian oil exported to the United States.1 Our fair city has become the single largest market for the environmental disaster known as the Athabasca Tar Sands. The inhabitants of Southeast Chicago were the first to learn that truth, from the grit in their throats, the grime on their windowsills and the rapidly rising asthma rates of their children.

Neighborhood groups, an environmental justice organization, a downtown NGO and the officials of EPA went into action, squaring off against the local corporation Beemsterboer Slag and a more formidable entity called KCBX Terminals, owned by Koch Industries. The first was relatively easy to dislodge: Beemsterboer had not even bothered to pull a permit for a major industrial operation carried out on a daily basis in plain public view. Standing up against the Koch brothers required a more serious legal case, along with a larger bloc of concerned citizens mobilized by the upstart alderwoman Sue Garza, who ran for office in 2015 with a campaign centered on the petcoke issue. In the three-year period between August 2013, when the petcoke first hit local headlines, and June 2016, when KCBX ceased its stockpiling operations, there was plenty of time for Chicago area artists to get involved, inventing new forms of representation, expression and action along the way.

Terry Evans, an acclaimed aerial photographer, literally came down to earth in this campaign, joining neighborhood organizations and producing extraordinary portraits and demonstration photos in addition to her fascinating aerials of the BP refinery and the accumulating piles of toxic wastes. In a later phase of work she recorded interviews with the activists whom she had portrayed, so that they could speak in their own voice. When she had finished her first series of images, her sponsors at the Natural Resources Defense Council said to her, “Now you have to get these out to the public.” So they went together to the Museum of Contemporary Photography at Columbia College in the downtown Loop.

Museum director Natasha Egan and curator Karen Irvine embraced the idea of a politically engaged show, which is not exactly common for downtown Chicago institutions. They reached out to a number of local artists, but also to members of the Southeast Environmental Taskforce and the Coalition to Ban Petcoke, who welcomed the artists to their neighborhood and wrote texts for the catalog. For a year after the first Koch terminal was shut down in March 2015, the artworks began to take form while the activist campaign continued full swing. When the exhibition opened on July 21, 2016, a significant victory had just been won: Koch Industries had cleared out its remaining dusty pile. “Petcoke: Tracing Dirty Energy” puts the close-up documents of a local struggle at the center of a far-ranging exploration of the petroleum world.2

Videomaker Steve Rowell filmed roadside scenes in the oil blocks north of Fort MacMurray, then launched his camera-equipped drone into the sky along stretches of the Enbridge pipeline routes through Canada and all the way down to Chicago, with a detour to the global headquarters of Koch Industries and their family compound in Wichita, Kansas. Photographer Victoria Sambunaris photographed ocean-going tankers in the Port of Houston, a number of which are tracked on a marine traffic monitor installed in the exhibition space. Sculptor Claire Pentecost assembled a “Library of Tears” made of hanging blown-glass droplets, some almost a yard long, filled with material documents of a toxic industry: sulfur, mercury, asphaltum, petcoke, polluted water from the Athabasca River, shredded US currency, snakeskin, dead bees, Bakken oil, light sweet Texas crude…. Videomakers Marissa Lee Benedict and David Rueter developed a science-fiction scenario around scenes of dust-choked northern China; while photographers Geissler/Sann produced a striking image of liquid methadone, which they liken to the dubious carbon-trading schemes that are supposed to wean us off a poisonous addiction, while making big money for the carbon traders in the bargain. I contributed a large wall map of Chicago’s Southeast Side, plus an online cartographic archive exploring the petroleum industry and its discontents at local, metropolitan, continental and global scales. Finally, the work of performance artist and community activist Rozalinda Borcila started only after the exhibition opened. She set up a series of carefully prepared public walks and a participatory mind-mapping workshop, exploring the direct perception of daily life in the Oil City.

A politics of perception lies at the heart of this endeavor, whether on the artistic or activist sides of the coin. Clearly it is not about the vague liberal ideal of “having a conversation” on petroleum and global warming, as though slippery aesthetics and cheap talk could change everything. But nor is it about direct action at all times and all costs, to the exclusion of any reflection on the labyrinthine pathways of fundamental social transformation. Instead the exhibition struggles to connect the lived experience of the urban territory to all the scales of energy extraction, transportation, production and trade, and to the geologic “deep time” of the Anthropocene. At stake in the meeting of artists and activists is an intimate sense of where one stands and how one moves within the tightly imbricated strata of the petroleum world. How do we begin to grasp the intricate immensity of the logistical system that brings buried carbon into the incandescence of personal pleasure and power, at the price of hidden pollution, invisible gases and irreversible damage to the earth system? How do we experience the forms and consequences of contemporary desire, when it is pervasively mediated by the massive expenditure of energies that are always somehow ecologically disruptive, whether they are reputed “clean” or “dirty”?

Art, like the scholarship and cultural critique that it inevitably draws upon, suffers from the infinitely dilating and delaying character of its experimental process and its excruciatingly tentative conclusions. That’s why art is so much more valuable when directly (though still contradictorily) linked to an activism that seeks both immediate effects and long-term societal change. As an unwilling subject of mounting social and ecological disaster in the fragile twenty-first century, I am often thrust back into a tragic contemplation of the forms and causes of voluntary blindness and managed oblivion. Participating in this Chicago exhibition, and in the communities of engagement from which it sprang, opened up a fresh sense of possibility. On the one hand it was institutional: it turns out that you can take a stand in a downtown university museum, and reach beyond the usual circles of art and culture to a much wider field of conflict and cooperation. On the other hand it was interpersonal: it turns out that you can cross barriers of race and class, when a complex cultural project shows clear concern for the raw unmitigated violence of the urban territory. Does this single case offer any wider perspective for the future relations of art and pipeline politics?

I’m sure it does: but only if you seek those relations yourself, and then maintain them. Art for art’s sake, like ivory tower withdrawal, is a broken straw in the maelstrom of climate change. As the global shift advances, with its train of threatening and disruptive effects, individuals will increasingly be called upon by conscience to participate in complex projects to repurpose or dismantle industrial energy systems that resist even the slightest transformations. The naive and hopeful call for this to be done in one glorious blow, formerly known as “the revolution.” The rest of us better get busy inventing new tools and social routines, as well forms of imagination and valuation to help carry them beyond the blocked horizons of the present. Utopian dreams find realization in direct confrontation with what is.

The premonitory signs of the Apocalypse are now simple facts: rivers of flame have already poured from the sky over the Athabasca Basin, just last July during the great Fort MacMurray fire. But neither signs, nor even simple facts, mean anything substantial until they are embodied in the process of creating another world. That requires starting with complex and partially hidden realities that you slowly learn to see, and then start showing to other people. As conceptual artist Antoni Muntadas put it in a fascinating series of works: “Warning: perception requires involvement.”

This text was originally published in South Atlantic Quarterly.

1 For a visualization of the petroleum economy in the Chicagoland region, as well as ample documentation of the issues discussed in this text, see the map/archive by Brian Holmes, “Petropolis.”

2 Further information on the exhibition “Petcoke: Tracing Dirty Energy” can be found at http://www.mocp.org/exhibitions/2016/07/petcoke-project.php.